Beloveds,
His Minion IKE has been struck a blow which renders all crafting skill as useless, so alas, she is still unable to offer you some creative inspiration.  However, such a blow was naught compared to the creeping insidiousness of The Red Death.


Now - a tale of dread horror I tell to thee. Oft said that the Plague creepeth into every nook and cranny and that no man escapeth Death, regardless of age, creed or wealth.
The tale is of Prince Prospero. He hath organised a Masked Ball for the entertainment of his friends. Outside, the Plague is all around, but he hides within his castle with his friends and doth lock the doors against the dreaded pestilence. Therein lie 7 coloured rooms, the last of which is black and red and contains a clock of purest ebony, which striketh upon each hour with a clamourous din. Each other room is bright and dreamy and filled with music, but the last is avoided by his guests due to it's ominous ambience and the clock. All is well until the strike of midnight and a new Guest appears. His mask- the face of a corpse, and his garments are a funeral shroud. Prospero is angered that someone of such little humour would arrive thusly, but the guests are in dread fear of this stranger and fall away from him. He walks through each room and Prospero catches him at the last - the black and red room with the ebony clock. When he confronts the figure, Prospero dies. His guests enter the room to attack the figure but find that there is nothing beneath the costume and mask. They all then die, for the Red Death hath infiltrated the castle. Darkness and decay, and the Red Death have at last triumphed.
Read Ye the dread tale HERE.

Fiona and i have still managed to make an inspiration piece each ..... Ike wrote the wonderful introduction to the new challenge.... THANKS IKE.... you are a star! 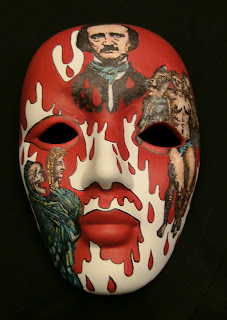 I altered a china mask..... i used stamps from SMEARED INK's, ''AS DEATH'' and ''QUOTH THE RAVEN'' stamped onto tissue and adhered to the cream painted mask. Once dry i coloured the images with promarkers as i wanted quite bright colours. I then painted on the red drips, finally outlining in black. Below are better views of the images. We hope you'll have time to join us this fortnight....you have til the 30th to come up with something. 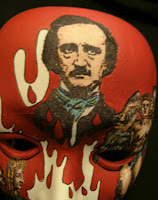 Posted by blackdragon at 10:38 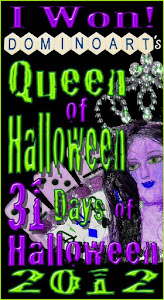 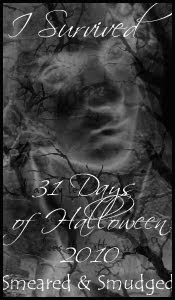